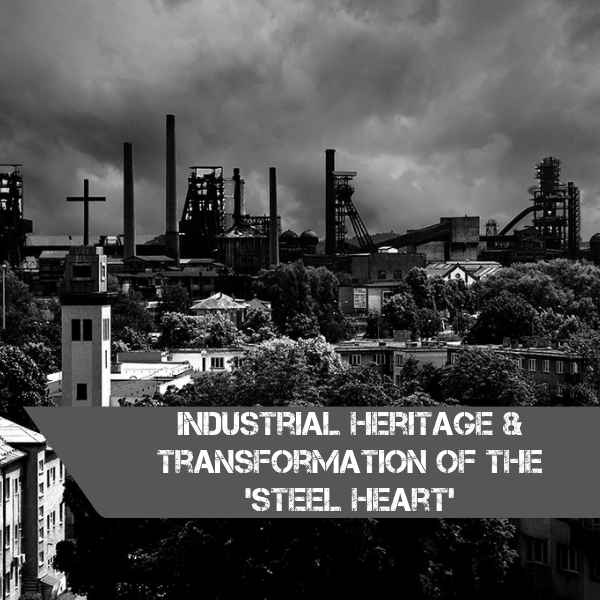 Industrial heritage and transformation of the ‘steel heart’ Ostrava

There is a place in Czech Republic, called the ‘Steel heart’, where the black dust from mine coal used to cover everything. Read the article by Lida, our Design Engineer, who will tell you a story of industrial heritage and transformation of steel manufacturing near Ostrava, the city where she comes from.

‘Steel heart’ or abusively called ‘Black Ostrava’ in the past, is the city where I was born. The reason for the name is simple: black dust from steel mines used to cover everything. You could see it everywhere: on your clothes, paths, ice rink; you could see the pollution in the air – they used to say. Fortunately, I can’t remember those times, but I have learned a lot from other people stories. Life was very difficult at the coalfield place, full of mining coals, heavy industry, ironworks and exceptionally strong people.

When I was born, back at the 90’s, these mining coals were closed, and heavy industry was being slowly moved away from the city. The places where there they used to work seven days a week has been closed and the silence started to dominate the place. Nobody cared about the mines anymore and no one wanted to make a use of these places. When the city cut down the mining industry, air started to be so much cleaner. However, the dirty leftovers from past time stayed untouched in the middle of the city of Ostrava, so the city never got rid of its label ‘black’. It looked very depressing and hopeless. Ostrava was considered as an outsider of the Czech Republic and people pointed at this city with disgust. But the city that I was born has been always strong, purposeful and determined.

A wind of change

The situation was not very bright before 2000. There were a lot of brownfields in the middle of the city. In addition, tourism was not really developed there. There were parts of the city that people have never visited before or never knew they even exist.
Everything looked so difficult and unreachable, but fortunately, there were some people with a vision. They envisioned to recover the city and give it a new life. They realized that Ostrava was different and instead of destroying and rebuilding something new, they tried to upgrade the city by converting its industrial heritage into something incredible and fabulous.
Since 2002, the area of Hlubina mine, coke plant, and the blast furnaces have become a National Cultural Monument. In 2008, the Lower Area of Vitkovice was added on the European Cultural Heritage list.
The brownfields were given a new function while keeping as much as possible of the original buildings and structures to keep preserve the original industrial spirit. Few parts of an old factory were turned into museums, the Jan Maria mine was converted into a hotel and instead of mining coal, they created a huge shopping centre – Karolina. The most interesting area – in my opinion – is the Lower Vitkovice area.

The mine coal Hlubina and buildings around, gasholder, coke blast furnace, U6
Vitkovice ironworks was established in 1828 and the beginning of the Hlubina pit excavation started in 1852. The last coal mining trolley left Hlubina in 1992. In 1998, after 170 years of continuous production, the manufacturing of pig-iron and coal mining in the so-called Lower Area was disrupted. Everything had been left in place for 9 years of nothing happening.
In 2007, the association of Dolni oblast Vitkovice was established to restore that region so the transformation has begun. The New Vítkovice project (including also another part of Ostrava Landek, Karolina) was the brainchild of Jan Světlík, CEO of the Vítkovice engineering corporation, and the architectural side of the project was coordinated by Josef Pleskot and his AP Studio. This project’s objective was to recover, revitalize and convert Vitkovice Ironworks and Hlubina coal mine in a place suitable for both residents and foreigners – a place for culture, education, sport, meetings.

The plan of tearing down was only intended for some buildings, but the most important and significant ones were destined for conversion. These buildings were Gong, Coke blast furnace, Mine coal Hlubina and U6. And there was also a place for something also – Science and technology centre.

The first conversion was a unique and brave attempt. The historical gasholder was converted into Multifunctional auditorium Gong. The characteristic circumferential structure was kept the same and the roof construction was lifted. A new concrete core with the raw surface was placed into the old structure. It allowed for a unique spatial disposition from smaller rooms to great hall on the top with the capacity of up to 1500 people. Gong is now being used for conferences, education, cultural events. The building achieved a lot of awards and was nominated for ‘Building of the year 2013’ award in the Czech Republic.

After that, in 2015 another transformation has – turning the blast furnace no.1 into Bolt Tower. Up to 1 200 tonnes of pig iron was made in the bowels of the blast furnace every day in the past. Today, visitors are taken on guided tours to learn about the iron making process. Blast furnace no.1 was closed but kept in the original structure. You can now go for a walk following the exact same path used to transport materials for the production of pig iron or relax in a café placed in the new extension.

There were other great conversions in Vitkowice area, turning the old inustrial building into i.e. the Science and Technology centre. What is more, there are many additional buildings in old Hlubina’s mine, where you can now find restaurants, cinema, places for education, exhibitions or a high climbing wall. Another projects are on their way and should be implemented in the near future. A new cable railway connection is also planned between the city centre and transformed buildings through the Amber path.

The people of Ostrava have a great place with a rich history, rare architecture, strong position in the middle of the city and that is a huge potential to make it a little bit more phenomenal. Many cultural events are now taking place in the city, e.g. the Music festival Colours of Ostrava, electro dance festival Beats for Love, Oldies festival, Rainbow run, winter ski cups and volleyball championship events and it’s all because of the great transformation of an industrial area.

I remember when I was younger while studying architecture and structure at the University, we got the opportunity to attend the speech and presentation of architect Josef Pleskot and CEO Jan Svetlik, godfathers of the transformation project. It was the time when the area was abandoned without any use. I was able to learn about their vision and plans and admire their enthusiasm about the planned transformation. I was excited and amazed at the same time, but somewhere in my mind, there was a little doubt about it, whether all those things could possibly happen. But now I can only admire this city with a steel heart, which proved, that everything is possible if you believe in it.